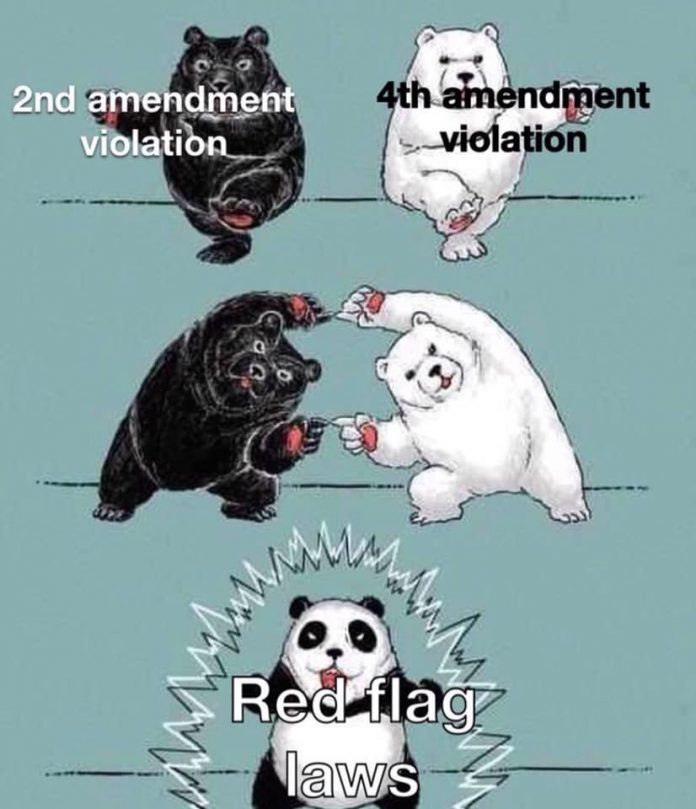 The legislature in the Ohio is currently considering two very different ends of the spectrum when it comes to gun laws. On the one end a bill was introduced, H.B. 316, that would allow family members, roommates, and LEOs to flag someone temporarily (for 180 days) and have their firearms confiscated and be prevented from purchasing any new ones. On the other end HB 174 and 178 would make Ohio a constitutional carry state for residents over 21 years of age and remove the duty to inform clause and a provision to revoke conviction under that clause.

So ultimately the legislative landscape isn’t all bad. Texas recently passed a myriad of pro self defense measures that threw the mainstream media into an apoplexy. They couldn’t fathom why increasing the ease with which law abiding citizens could protect themselves and shoot back in a situation like El Paso might drastically curb the casualties caused in a future incident?

“But Keith, you dunce, that’s what all the gun control is for! ERPO’s and UBC’s and bans will solve this violence problem.”

Uh huh. And I own a suspension bridge spanning the peninsulas of Michigan I can sell your for a steal of a deal.

No! Everything about the structure of every red flag law I have currently read has had a weak mirky standard of proof for the issuance of an ERPO. The language sounds alright on the surface. But digging into the order everything is stacked against the person served with the order. And I am at a loss to define how someone so dangerous they cannot be trusted with weaponry cannot either be committed for their health into a facility or charged with a crime that would result in their ineligibility.

ERPOs add this murky dark middle ground where it doesn’t have to be a criminally threatening act or a high enough risk situation for committal but it is somehow grounds to violate the person’s constitutional rights. The Red Flag is ripe for abuse by hostile persons within family and domestic circumstances whose relationships have soured. Most “due process” seems to consist of one hearing the party must make on short notice (unless it was issued Ex Parte) and then the “flagged” individual gets one hearing opportunity every 6 month period to restore their civil rights.

“To the subject of this protection order: This order is valid until the date and time noted above. You are required to surrender all firearms in your custody, control, or possession. You may not have in your custody or control, purchase, possess, receive, or attempt to purchase or receive, a firearm while this order is in effect. You must immediately surrender to the (insert name of local law enforcement agency) all firearms in your custody, control, or possession and any license to carry a concealed handgun issued to you under section 2923.125 or 2923.1213 of the Revised Code immediately. A hearing will be held on the date and at the time noted above to determine if an extreme risk protection order should be issued. Failure to appear at that hearing may result in a court making an order against you that is valid for one hundred eighty days . You may seek the advice of an attorney as to any matter connected with this order.”

What recourse are the accused given?

So if it is proven that the person who filed the order did so falsely, which pretty much means they have to admit they did so maliciously and so long as they don’t admit it (and their lawyer will absolutely keep telling them not to admit that) they get hit with a 5th degree felony. That’s 6-12 months incarceration time. Meanwhile a person slapped with the order will be shackled with every violation a firearm prohibition somes with for any violation of the order. Which is still not a criminal conviction or medical commitment that would require forfeiture.

So again, unless said individual who filed the order makes the legal mistake of admitting they filed maliciously and falsely, they are immune from prosecution for misuse of the order. There isn’t going to be effort expended to independently verify an ERPO is not being maliciously applied.

On the positive side, 174 and 178 are looking to allowing carry of any deadly weapon, not just a handgun as the law states now, under the current rules of concealed carry. Unless it is otherwise prohibited by law it would also be lawful to carry a weapon without a license for anyone 21 years of age or over.

Additionally the duty to notify requirement for persons stopped by officers would be struck from the law. Convictions for failing to notify would also have a path to be overturned and penalties struck from the public record. Ultimately the goal is to bring less frivolous pressure against lawful gun owners in their more rudimentary interactions with Law Enforcement.

Obviously if an officer were to ask if behoves you to answer the “are you carrying today/tonight?” question but, like “Duty to Retreat” laws it removes a sometimes testy provision.