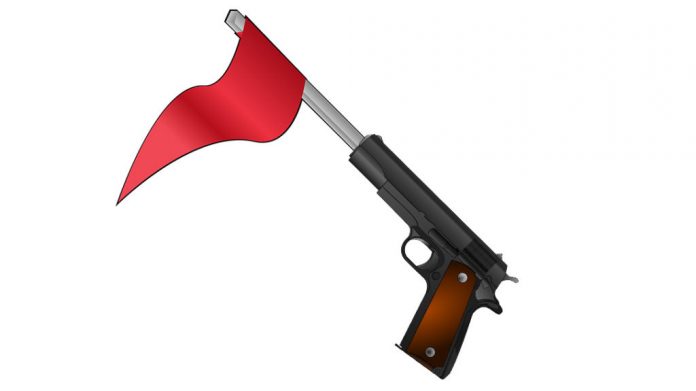 From our friends at DRGO
(from slickgunsnews.com)

Following the El Paso and Dayton shootings this weekend, we heard from President Trump that it’s time to establish “strong background checks” and support “red flag laws” such as Senator Lindsey Graham believes can be enacted by bipartisan majorities soon in Congress.

DRGO has studied these topics for years, as have many other Second Amendment advocates. (You can see what we think about red flag laws here, and what a good background check approach would be here. )

These laws raise huge red flags in themselves to anyone who cares for civil rights and freedoms.

Background checks are too often inaccurate with too many false positives. Making them universal would be a necessary and probably irrevocable step toward facilitating universal gun registration. That, of course, would enable gun confiscation from legal gun owners if government decided to do so.

“Red Flag Laws” (or “Gun Violence Restraining Orders”, or “Emergency Risk Protective Orders”) are perhaps well-intended in the hope of preventing harm to people who might hurt themselves or others. There are reports in the media that such laws have probably prevented some suicides, and possibly some homicides—data that we so far haven’t seen. However, we do know of one death already in Maryland during an unexpected confrontation with police serving the order.

Should Congress and the President settle on a federal law promoting red flag laws, at least that is all they could do. Presumptively, the federal government can’t require all jurisdictions to intervene identically in cases of potential risk and confiscation of weapons. It can, as Graham’s bill provides, encourage states to pass these laws and provide grants funding their expenses. Yet this is another slippery slope of federal government control to be wary of.

At least 12 states plus the District of Columbia now have laws enabling gun confiscation when a judge finds that a subject might be dangerous. New Hampshire, where they claim to “Live Free or Die”, is currently a battleground for another, where DRGO is assisting the pro-rights side. None of these laws is fair or, likely, constitutional in design or application.

You’ll find a summary of DRGO’s opposition to these laws here, which links to our detailed Position Statement on Firearm Confiscation due to Dangerousness. As you can see in our Position Statement, the constitutional issues involve violations of the Fourth (“unreasonable search and seizure”), Sixth (“rights of the accused”), Fifth and Fourteenth (“right to due process”) amendments. We aren’t lawyers, but our Founders wrote so that laymen can understand.

Let’s think about what good laws allowing confiscation for very particular reasons might look like. (Hint: it’s all about due process and relevant interventions.)

Due process must be the cornerstone of any intrusion by government into any individual’s rights to freedom and property. This is the overarching requirement for legally sound confiscation of anyone’s property, which must include the presumption of innocence.

RFLs currently in place and in development allow a wide assortment of complainants to ask authorities (beginning with law enforcement and/or a court) to seize the subject’s property with no warning to the subject until the police arrive to serve the order. (These are called ex parte hearings, in which the subject is not to be present, and may not even be notified of the proceeding.) It is claimed that the right in 2 weeks or a month, then in another year or so, for the subject to appeal the order and demonstrate his safety and responsibility makes this fair. Not at all.

Only notice given to the individual of the complaint, followed by a court proceeding in which a prosecutor bears the burden of proving risk, would constitute due process, up front and as the events play out.

Unlike for most applicants for restraining orders against a feared individual, there are only minor penalties applicable for false reporting of dangerousness with firearms. We know there are many harassing restraining order requests; one reason is that penalties for false claimants are rarely or severely handed down.

An order to avoid a certain individual is one thing; an order for one’s home to be invaded and one’s property to be seized is a far greater imposition. Harsh penalties for demonstrably false reports have to be included and used, or this will become an even more favored means of retaliation in relationships. This should be no barrier to seriously concerned reporters.

When firearms are confiscated, other dangerous weapons also should be. This is why the focus on firearms only may leave the individual or others even more vulnerable. (Not that other firearms or weapons couldn’t be obtained by a seriously motivated person.) When they are, these laws must mandate careful guardianship of what can be many, expensive firearms that are damaged when stored in inclement conditions (for example, the many firearms confiscated from New Orleans citizens during and after Hurricane Katrina).

They don’t. Neither do they provide for the immediate return of wrongly seized firearms (or within any time frame). They must.

More comfortable options for what may be temporary loss of one’s weapons should be built in to these laws. When responsible family or friends are available to hold an individual’s  firearm collection, this is far preferable to seeing them disappear into the bowels of a law enforcement headquarters. Obviously, strong penalties should the helper dispose, divert or return the weapons without legal sanction should be in place.

Last but not least, as important overall as our insistence on due process from beginning to end, gun (or general weapons) confiscation is no panacea. It is not even the most important intervention.

There are only two reasons confiscating weapons should ever be necessary: someone has criminal intent, or someone is influenced by a mental illness (and both may occur together).

Criminal intent has to be handled through our criminal justice system; mental illness has to be handled in our mental health system. Most current and proposed RFLs don’t require, let alone provide the means for, intervening in these ways, which misses the whole point of taking action based on well-founded suspicion that a person could do real harm.

It is vital that anyone subject to seizure of firearms be treated either as a criminal or for his psychiatric problem, in order for RFLs actually to promote individual and public safety. Generally speaking, laws already exist that can be exercised for these purposes. Where they don’t, they are greater priorities to add than a narrowly focused RFL alone.

Let me give an example of how this sort of legal process should work. In New York state, in order to retain even a psychotic, threatening patient more than a couple of weeks for treatment in a hospital (or to administer necessary treatment that would relieve the patient’s delusional fears), a strict legal process must be followed.

Several physicians/psychiatrists must apply for a hearing at which they must present evidence supporting the conclusion that the patient requires treatment to continue in hospital. The patient has no cost representation by an attorney working for a New York state agency that exists for this purpose. The case is argued, and the hearing office decides.

If RFLs were constructed to preserve individual rights, they would work that way. After what might have to be an emergency intervention, the subject would necessarily have the opportunity to get it canceled, with legal representation at no cost. The subject would be considered innocent unless demonstrated to require further intervention.

The “prosecution”, as it were, would have to prove to the court’s satisfaction that the individual presents a danger, and that managing that danger requires gun confiscation. And the outcome would have involve proper criminal and/or psychiatric intervention if indicated.

These are the reasons we in the liberty lobby continue to fight against RFLs as they exist in reality and in the minds of those who believe “something must be done”, seemingly always via increased government dominance of individuals. These are the reasons these laws violate not just the Second Amendment, but multiple others.

DRGO would love to see fair and constitutional laws that establish appropriate, useful interventions for potentially dangerous individuals. We are not optimistic that we’ll see them.