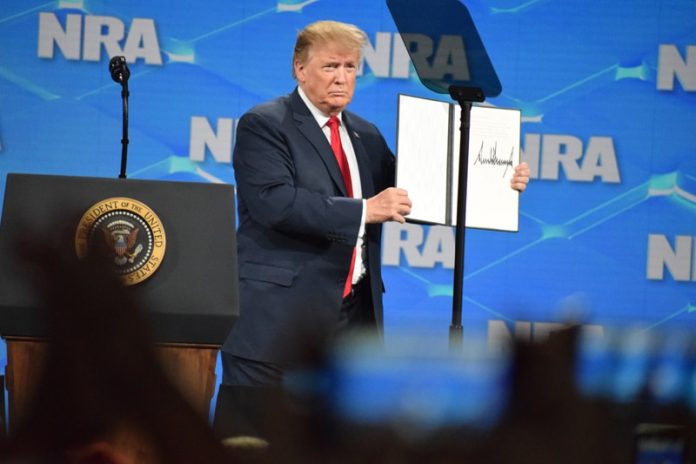 While boarding Marine One on his trip to the U.K our President, who so recently spoke at the NRA Annual Meeting, was quoted quickly as saying he did not like firearm silencers. “I don’t like the at all.”, President Trump stated amid a flurry of other questions on Mexico, the U.K., Australia, and other topics.

Does this mean action against the NFA regulated items?

Who knows… The President is certainly known for off the cuff remarks and for whatever his opinion is as he understands the topic the moment he is asked. His history on firearms items that generate controversy is not encouraging though. RIP bumpstocks.

The major difference is that silencers are National Firearms Act controlled items already, they fall under the strictest level of federal gun control. Silencer owners are taxed, they are are fingerprinted and tied specifically to the silencer, and they must wait months to complete their purchase as an investigation is conducted into their background. What more can you ask of them?

Gun control proponents would love themselves a good hearty ban. It would accomplish nothing to improve homicide rates, violent crime, or mass shooting statistics but it would give them momentum in the legislative direction they would prefer.

It was one comment during the portion of the tragedy news cycle that has latched onto silencers as the item to blame for this workplace violence incident. That’s how we term these events right? Nidal Hasan? Oh wait no, he had a known motive when he attacked a government building full of soldiers whose care he was charged with as a Medical Corps. Officer.

As the President concludes his visit to the U.K. and returns we will see if he directs any actions against silencers or makes moves for gun control like he did with bumpstocks. But for now we wait.